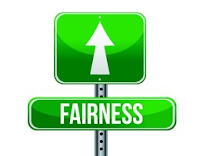 My children seem to complain less and less often about how they routinely get the "short end of the stick..."  They are about four and seven years old, respectively, and they already have a certain degree of emotional maturity that most adults in our culture seem to lack.  My wife and I try our best to continually remind them that life is not fair, and it'd be a good idea for them to practice getting used to it.  Consequently, the kids continue to feel pretty angry with the apparently endless injustices they perceive, and, remarkably, the reactions they have to their understandable distress is not so destructive to themselves and others as they used to be.  We try to discourage their dramatic attempts to manipulate people around them to make their world "right" again.  We do this by trying to "normalize" situations that are apparently unfair to them.


I find our attachment to the constructs we have of "justice" and "fairness" to be interesting.  Until fairly recently, I think I have been as unconscious as the next guy regarding my habit of mistaking my ideas of what is and is not fair as some sort of ultimate truth.  How can anyone argue, for instance, that we are not all born with an equal amount of inherent value?  Easily!  Look around - parents all over the world are teaching their children to hate and fear others who are different.  Children are being taught that they are "better than..."  Children are learning that they are special because of where they come from or who they come from.  Others would argue that these sorts of lessons provide youngsters with a false sense of empowerment. My thoughts are that we are all very special, and usually not in the way our parents taught us.  I think our inherent value derives from one simple event - our birth... 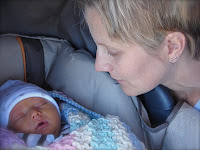 So who is right?  Is there some higher wisdom in these matters?  Is it "unfair" to treat people with different degrees of basic respect?  Our ideas of what is "fair" will always be fundamentally different from someone else's ideas, and there will always be conflict and tension... For reasons that are mysterious to me, this seems to be an inescapable component of our humanity.  Perhaps our greatest lesson in this life is to develop a sense of humor around our tendency to disagree on, well, everything...  To the extent that we can step outside ourselves from any great distance and look back in, the whole shebang is rather comical.  If you don't believe me, then learn to laugh at Monty Python, and if you don't think Monty Python is utterly hilarious, then you are wrong, and I am right, about everything.  If you find me to be rude, grandiose, and unfair at this point, then work on not overreacting, and try not to take it so personally that I have more inherent value than you do...lighten up - I'm kidding.

If you're not chuckling even a tiny bit now, then skip to section Q below. 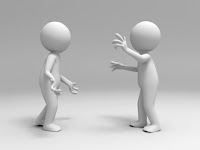 Some folks seem to stand on a soap box and dedicate their entire careers, and sometimes their entire lives, to fighting against what they believe to be a particular injustice.

Some of these folks are labeled "fundamentalists," and others are simply referred to as "Gandhi."  I often wonder if the degree to which these people have attached themselves to achieving their self-righteous goals has been directly proportional to the amount of suffering  they must have endured.  In other words, are expectations truly the seeds of resentment, as the saying goes?  To make matters even more confusing, we sometimes get our way...we actually win the fight!  This is always lots of fun, and our victories are often mistaken for God having confirmed our perfect judgement.  Hitler was extremely successful in his various campaigns to right the wrongs of the world, and many were certainly convinced that his victories were the result of divine intervention.  Here's the crazy part - they probably were, and isn't everything the result of divine intervention?  So, the only way to even begin making any sense of what transpires in God's world is to stop the grandiose and vain attempt to make any sense of what transpires in God's world... How presumptuous for us to consider that we may actually "get" the big picture.  So, I guess we're back to practicing tolerance for the apparent unfairness of it all, just like my kids.

I do think it is truly noble for any of us to stand up in an assertive and dignified fashion for whatever our truths may be.  The key to our sanity, however, is in the degree to which we are attached to any particular outcome as well as our attachment to whether or not our truth is consistent with everyone else's truth.  So, there are several layers to how we can bring suffering and resentments into our lives, and it all starts with a relatively grandiose, and often unconscious, sense of self-importance. 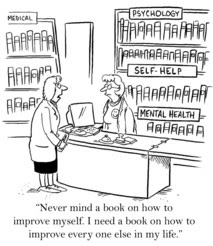 I genuinely admire people who advocate responsibly for what they believe to be right, and I think the Serenity Prayer speaks very well to the extent of our "attachment" to any one particular outcome: 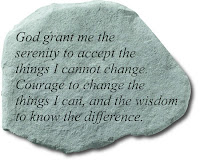 
Perhaps it is o.k. for Don Quixote

and I to "fight for what is right" as long we remember that someone else will undoubtedly disagree, and that our notions of what is fair will always and absolutely be subjective.  So let's get on with it, state our truth, let go of the outcome, and get over ourselves in the meantime... The ultimate outcome is really none of our business anyway...